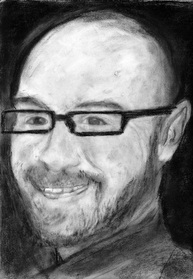 Portrait of Paul by Sarah Nolan Miralles, his Sister
Born in Dublin, Ireland in 1974 to a family of 3 other brothers and 2 sisters, Paul Nolan Miralles was
a Photographer and Waiter at the Hard Rock Café in Amsterdam. He was half Irish and half Spanish. As
a teenager, he played rugby for his secondary school, Marion college in Dublin. In 2000, he graduated with
a Bachelors degree in Photography from the Dublin Institute of Technology  and a certificate in Photography from UCD  (University College Dublin) and then shortly after moved to Amsterdam, where he lived and worked for over 10 years.

Paul was a "gentle soul", who was passionate about photography and always had a camera in his pocket, ready to capture a special moment. His first exhibition of his photographic art, called "On the Surface",
was held in Amsterdam in 2008, in collaboration with his friend and fellow photographer Lauro Govoni.
At college he had also mounted several exhibitions of his work and before he passed away, he was working  on a new project.


A deep thinker, yet a gregarious, warm and sensitive person, Paul touched the hearts of all who knew him.  He was an avid Aston Villa and Real Madrid fan and was not a happy man when his teams underperformed! Paul was also a huge cinema buff, who particularly loved Quentin Tarantino and named his dog Quentin after this cineast. He also had very eclectic taste in music, from The National, Glen Hansard & the Frames to Dire Straits, ColdPlay and Tunng to name but a few. (see the playlist of some of his favorite songs played on the English Breakfast Show in Amsterdam
in his memory).

At the Hard Rock Café in Amsterdam, he was known to colleagues and clients alike as "Lord Paul". He was an extremely popular waiter there, and had a particular habit of handing out yellow and red cards to clients, if he felt they had 'misbehaved' in any way, ensuring they would come back again and again for more.

Paul inexplicably went missing on the night of the 12th April 2011 and never returned home. It is assumed he passed away on the 13th April and his family lead an extremely extensive search operation in Amsterdam to try to find him, including using media (Dutch, Irish and Spanish), social media, flyers,diplomatic aid, Signi Zoekhonden Association, and major searches carried out by the family and Amsterdam police. His remains were recovered by the family, with the aid of several very brave friends and the Signi team, and memorial services were held in Dublin and Katwijk in May 2011. Thank you all so sincerely to all of Paul's friends and family and the Hard Rock Café Amsterdam, for all your amazing support throughout this very difficult time.